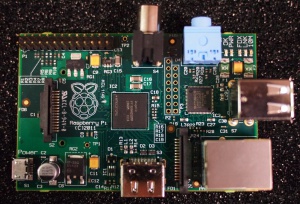 Following up an excellent January berkeleylug blog entry by goosbears, the Raspberry Pi (raspberry_pi on twitter) is a $25, tiny cheap ARM computer for kids. The $35 version has an extra USB port and built in wired ethernet. USB wifi adapters can be used with it. Just add a monitor, keyboard, mouse and network and it’s a decently powered Linux computer with headers for experimentation. It was created by a UK registered charity and is now starting to ship to the backlog of thousands of orders. Much more is known now than was in January. People are starting to put them to good use.

The demo unit we had in our booth at Maker Faire was the star of the show. People came from all over the faire to our booth in order to try out the increasingly famous Raspberry Pi. The Raspberry Pi Foundation spoke at the Faire twice but I am not sure how many other exhibitors had one running live in their booth for people to see and use. The 1080p video we played raised some eyebrows for both the current movie trailer content as well as the strong performance of the little Raspberry Pi.

The North Bay LUG will be hosting a talk June 12th in Sebastopol by Allan Cecil on this incredible little computer. We are finalizing arrangements for a Raspberry Pi speaker for the Bay Area LUG on June 19th in San Francisco.

Since it’s only a printed circuit board (PCB) some additional parts are required to use one. I’ve seen some cool thingiverse 3D printed cases for these small computers. I need to get to noisebridge.net during an appropriate introductory event with the downloaded patterns and make my first 3D printed item on their rep-raps.

Debian is the recommended Linux distribution with Arch and QtonPi also available. Fedora is also supported. Unfortunately Ubuntu does not run on it because it is an ARM v6 board and Ubuntu currently only autobuilds for ARM v7.

A local nonprofit, Partimus, provides repurposed hardware and open source software to schools in San Francisco and Oakland. Full disclosure: one of the hats I wear is as a Partimus Director. We are taking suggestions for how to make best use of a donated Raspberry Pi from james2_0. Keep your eyes on the comments for what we decide to do with it.

Eben gives us the scoop in this Make Faire video.

The btrfs is a new Linux copy-on-write filesystem that will replace ext4. As the author of ext4, Theodore Ts’o agrees this is the right direction. The new filesystem is pronounced as either "butter F S", "better F S" or "B-tree F S".

The main site is hosted by kernel.org.
The biggest problem I heard about was that a user space tool was missing, however that was released in Feb, 2012 for use by sysadmins and Linux distributions.

We hope you have enjoyed our regular meetings at Bobby G’s in Berkeley on the second and fourth Sunday of each month. Our next meeting is May 27th. We also talked to an incredibly fun group of faire goers about Bay Area Linux all weekend at Maker Faire May 19th & 20th.