In my opinion, Google’s web-services and Linux go together like pie and ice-cream.  Though, there are some people in this very LUG that would disagree with me about Google’s benevolence, there is no denying the quality and convenience of gmail etc…  Moreover, even though Google’s web services themselves are not open-source, they are built on top of an open framework and toolset, and Google itself sponsors some great open-source projects (chromium, android, Kernel development etc).

If you are of a like mind, you probably already use google’s services like gmail, google-voice (the best thing since sliced bread) and google reader.  Like me, you might have been in a constant search for a notifier applet for your taskbar for these services.  I have used CheckGMail for a long time, and then docky’s builtin gmail applet, but I have now found a real winner after reading a post at OMG!Ubuntu.  It’s called googsystray; it’s one program that looks great and notifies you of new messages in gmail, wave, gvoice and google reader in your taskbar.  It comes with a lot of nice features.  For example, you can send SMS messages with google-voice right from the applet.

Here are a couple screenshots: 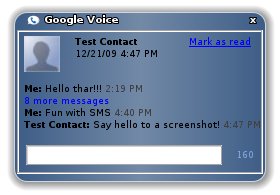 And here is one screen cap from the original OMG!Ubuntu Article where more details can be found:

Go ahead, follow the link above, grab the .deb and give it a whirl.