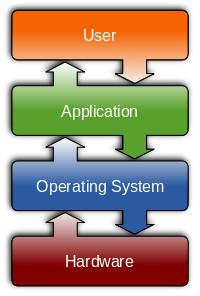 The notions of “freedom” and choice are not as binary as they used to be when time sharing a machine in the 1960s and writing all your own software. Few people need or want to see all the code for everything they run, and yet the commercialization of software, hardware and data silos can be seen as a troubling movement of it’s own these days. Practicality can intersect with true believers in new ways. There is a whole stack of requirements needed for what most people call full solutions today. One’s machine (ram, cpu, disk and network) with an OS, virtualized or not, isn’t where most people stop. People care about using their data on Internet sites with beautiful user experiences.

I am not sure which wifi drivers the FSF approves of these days but the list must be quite limited. Video drivers have gotten better lately but when traveling and connecting to a number of video projectors things need to just work. The move away from Fourth, proprietary Award and proprietary Phoenix BIOSes to locked down BIOSes and boot loaders implementations using UEFI – if implemented well, can actually help validate that the OS you wanted when setting up the machine is the OS you are actually running.

Sometimes there’s a gap in functionality between different solutions. All things are usually not equal when making these choices. A key reason that commercial and proprietary software solutions exist is to address problems people are having with their existing solutions. They can pay developers to focus on and solve people’s problems. The complexity

If I just want to run a web browser, how much does it matter how I run it? If running Firefox on Windows, am I more or less ethical than when I’m running Firefox on Linux? How about Firefox on FreeBSD vs. Darwin vs. Apple MacOS? How about Chrome (or Chromium) vs. Firefox vs. Midori? How about running Internet Explorer in virtualbox to access sites that require it? How about iOS vs. Android if carriers lock them down and it’s illegal to unlock them in the US anyway? How about a tablet running Windows 8 vs. a Raspberry Pi? What about trying to watch an HDCP protected Blue Ray? It might be necessary if DVDs become less common.

When I’m using relatively free hardware, operating system and browser to talk to facebook or using Google apps, does this invalidate all my other choices? What do you think?